Everybody has an Internet Troll, why should JC Rathwell be any different. JC Rathwell Stalkers name is Buck LaRoche aka Sylvain LaRoche. For the last 3 years, Buck has threatened to kill myself and my wife Felicia, had an ex-employee break into our home and steal from us, posted that Las Palmas resort is a "scam", that the villas were never built, and people paid money and never got a condo?! For those of you who know us, realize that these statements are ALL not true. JC Rathwell already took Buck to court for Defamation and Slander AND WON. The reason why I post this now, is since our arrival back in Canada, he has started posting these things all over again, mainly on TheDirty.com website and has now threatened to send the Hells Angels to our house. We have filed a complaint against him with the RCMP, but they won't do anything We had some of our Facebook friends send us some of these posts (attached), but for people that may not know us, or will believe anything they read on the internet, I encourage them to contact myself at This email address is being protected from spambots. You need JavaScript enabled to view it. and they can hear both sides of the story and they can decide for themselves who to believe.

Thank you for all of your support and wish us luck!!!

He is known to police, and we are not the only people he has harassed. He even threatened to kill his probation officer in Kamloops. 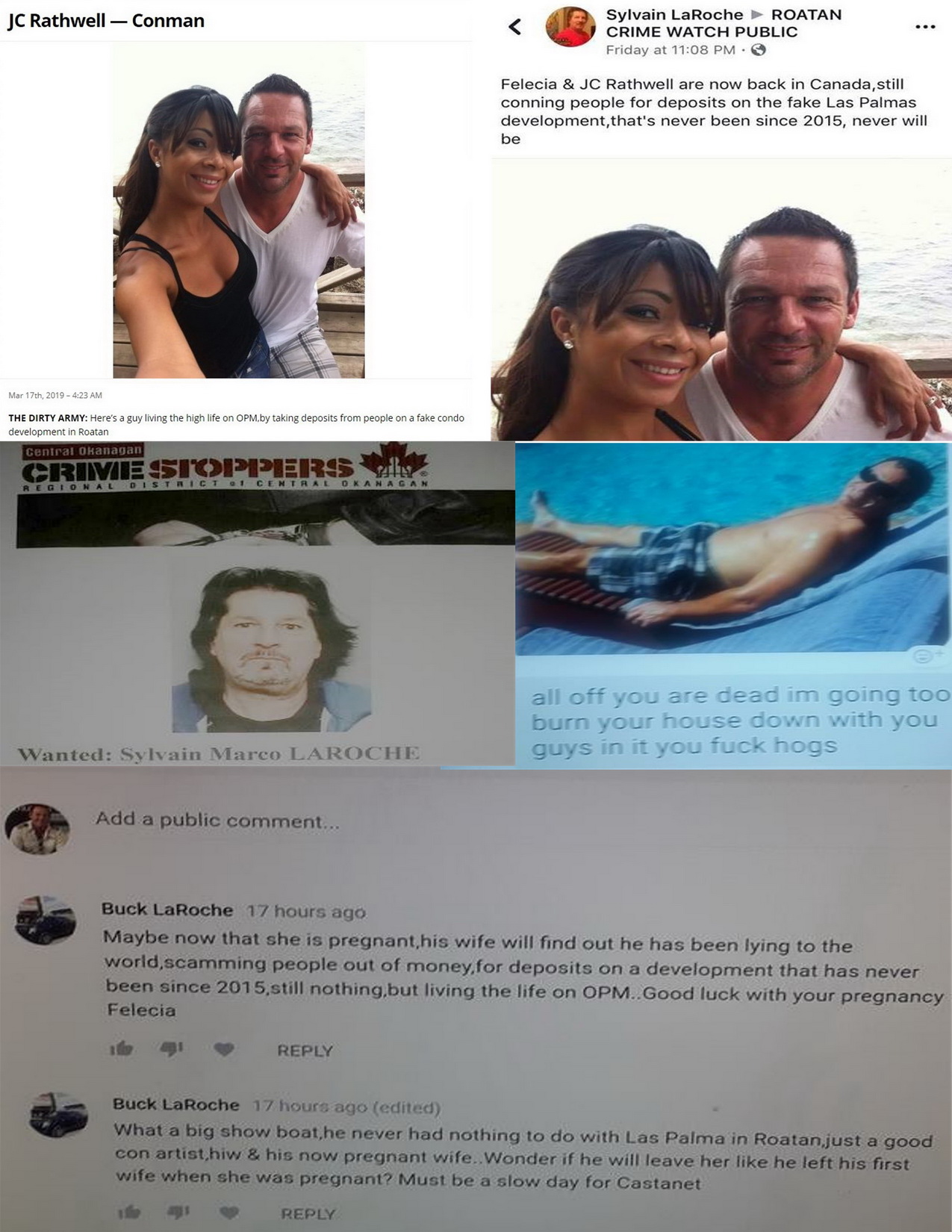 In 2015 and before, when JC Rathwell lived in Canada he did NOT know Buck. They were just Facebook friends and Buck washed JC’s car.

JC Rathwell posted on Facebook that he was moving to the Caribbean and was starting 2-3 businesses on Roatan with his Honduran corporation, and Buck contacted JC asking if they can do something together?

JC opened up a scooter rental BUSINESS on Roatan, while Buck was still living in Canada,

Buck had problems leaving Canada because of his criminal record in Canada. His parole officer couldn’t get his passport ready in time. So JC had to hire and train staff until Buck got to Roatan …..…4 months late.

2016 Buck arrived on the island, and in the first 10 days of Buck running the scooter business, both employees that JC hired and trained, QUIT They could not work for Buck. It was clear to JC that Buck was unable to run a business and Buck was going to get JC into trouble on the island… JC made a mistake. The reputation and credibility that JC created on the island was being tarnished by Buck’s actions, so JC told Buck that he didn’t want anything to do with Buck, and JC wanted out. JC told Buck you can have the scooter business just leave his family alone. Buck found a new partner and they ran the scooter business for the next 4 months, but they couldn't work with Buck either and it failed. Buck came to JC wanting his money back JC Said No, and that was when Buck started saying crazy things on line.

Buck is posting on social media that JC is a CON ARTIST, And the Villas JC is promoting online is a SCAM. Buck became violent and broke the front glass door where JC was storing the scooters.

2016 JC took Buck to court in Honduras and won a Defamation suit against him and Buck was ordered to serve 30 days in jail,. After the ruling and they were looking for Buck, He posted that he was going to kill JC and his family.

2017 Buck fled back to Canada before they could find him and serve his 30 days in jail.

2018 JC Rathwell came back to Canada for the summer and Buck started posting all these false claims again saying that I'm a con man, that I stole other people's money
Buck Forged a false document and contacted a castanet news reporter, trying to get the news story to run it

Buck posts on line that JC is a con man, and posts that he's going to send over the Hells Angels to my house

Once Buck found out I hired a lawyer to defend him, Buck started sending multiple emails to JC's lawyer about nothing, trying to run up the legal bills

April 30, 2019 settlement conference in Canada the Judge again orders Buck NOT to contact JC, but just like in Honduras Buck continues to email and harrass JC for 2 more months.

As you can see by the below Court documents dated October 31, 2019, JC Rathwell was found NOT GUILTY (again) , and the case was dismissed in a Kelowna Provincial Court. 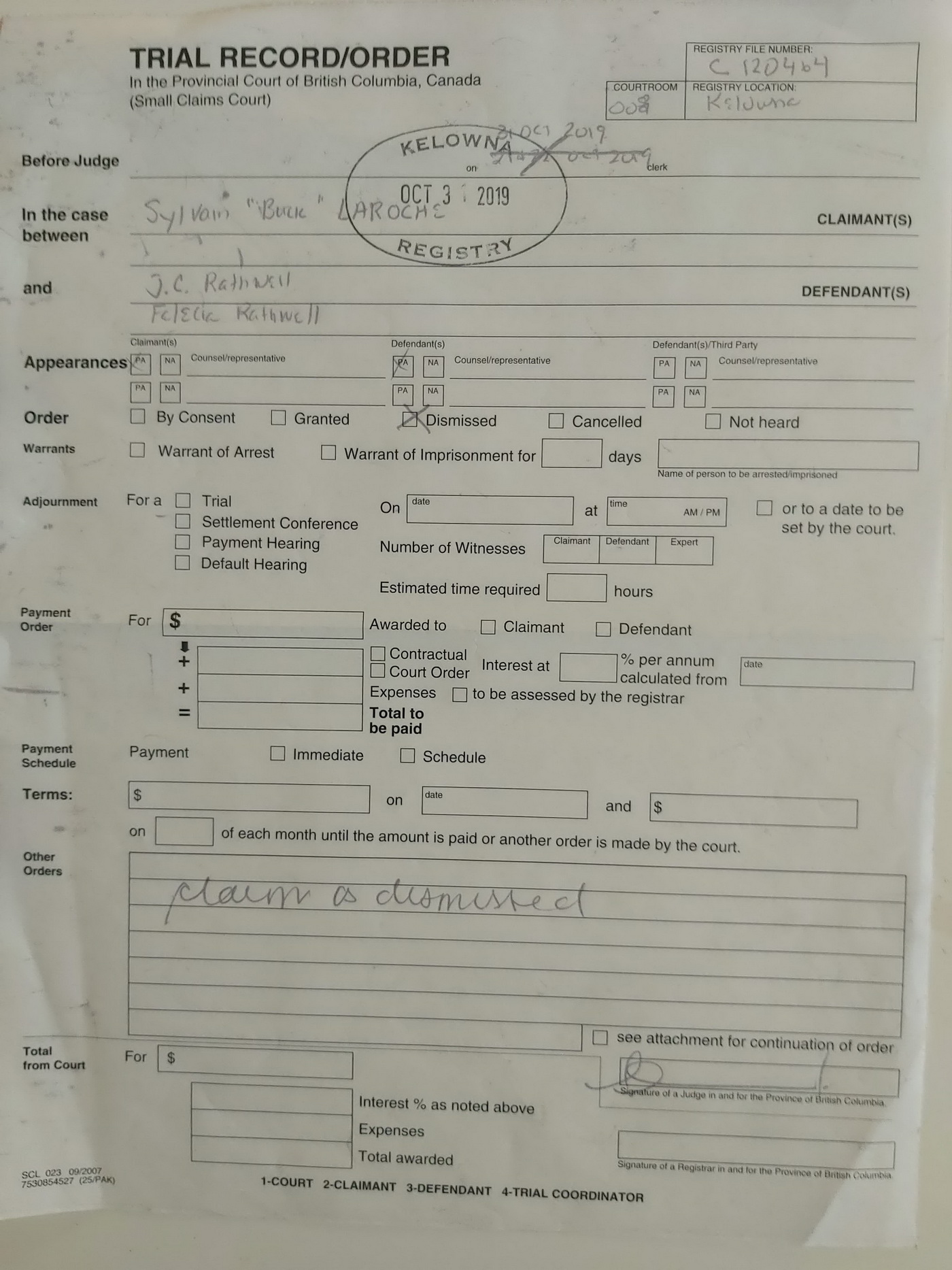 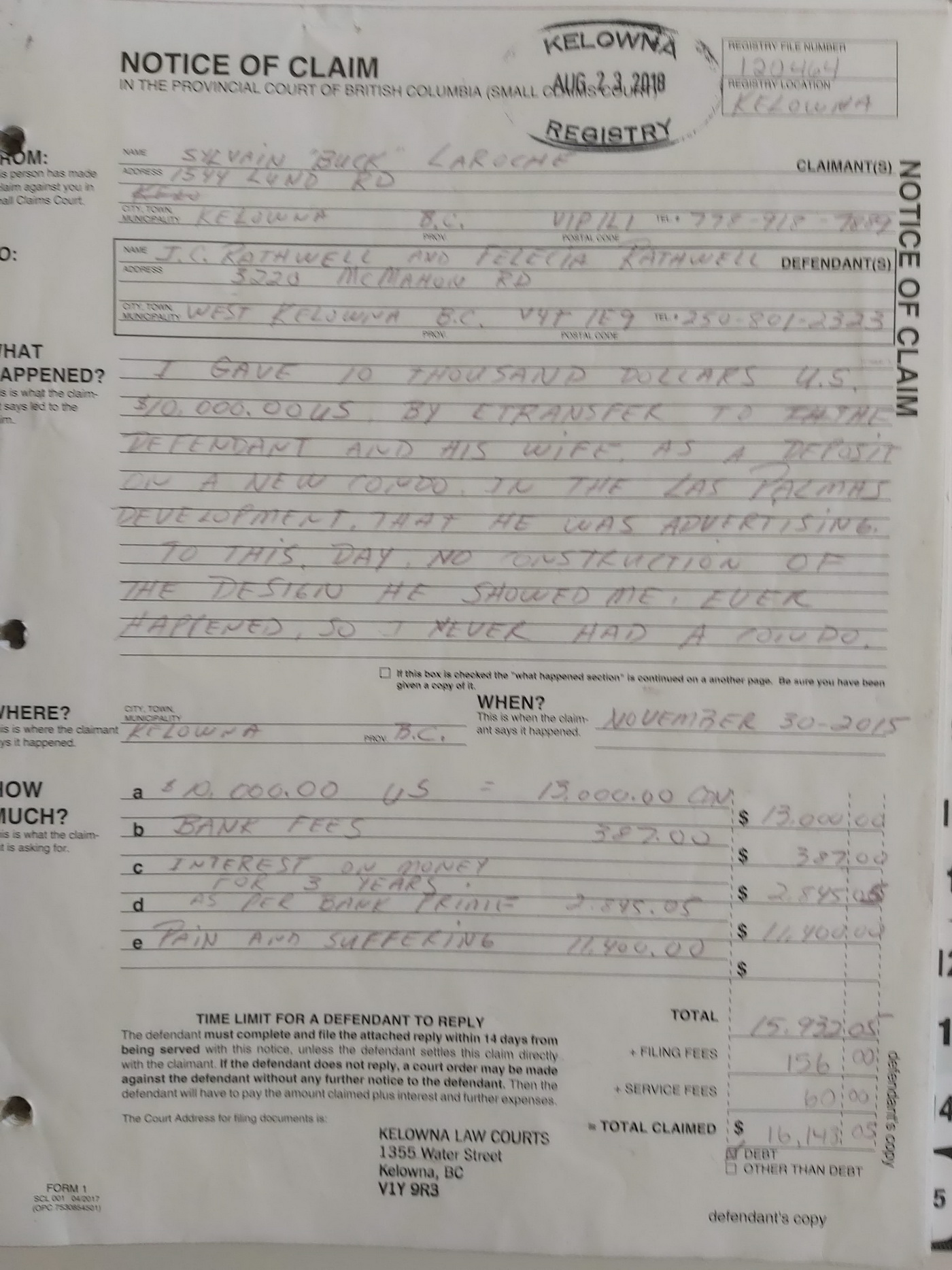 JC Rathwell - is an Entrepreneur extraordinaire in the truest form of the word. In the last 20 years he has started over 50 businesses. He has built all these businesses with the motto: "Under Promise and Over Deliver". Read More